The hill on the other side of the road, to the east, is called Mount Moon. I discovered this while wandering the forests and coming across a map of what was Hemenway Farm. Learning a place is something I cannot live without. I crave connecting the dots of rivers, hemlock groves, swamps, and ravines. I want to know the land as much as I would a person.

Before deciding to venture outside, the voice of reason says, “Don’t waste your time wandering, there’s work to be done.” If I am present enough to listen deeper, the voice of freedom says, “This walk will change you, take the first step and don’t think too much.”

After the walk, I yearn for more. I want to know what it’s like to connect Mount Moon to those cliffs in the distance. So human of me, to want more instead of sinking into the satisfaction of each moment. My mind wonders where the Moose live and if I will ever come across one? The sun is setting, illuminating the hill with violet blue. It’s time to go home. 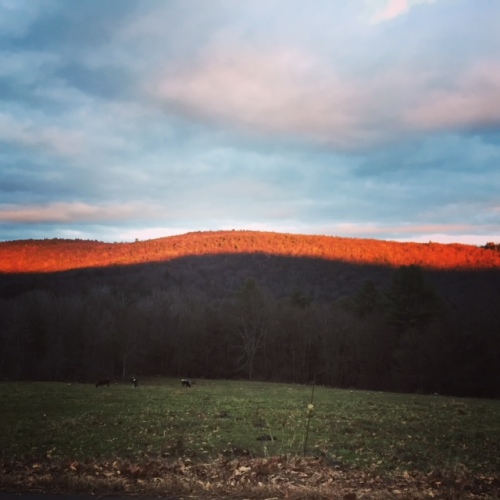 Upon returning my neighbor, Jay, is near the driveway. He felled an Ash tree that was nearly dead. The grief in his voice is like the grief of the Ash’s fellow trees, how they will miss their friend of nearly 40 years. In one deep cut of the saw, it is down, the sound of ancient wisdom crashing onto the frozen Earth. It’s weak brittle limbs scattered throughout the snow like shards of glass.

I ask if he’s planning to fell the mighty Birch next to it, who I have grown accustomed to gazing at from my window each day. It’s white bark against the dark forest is like a lightning strike, but longer lasting. It even has a small Chaga mushroom growing from its side, which I will never take for it belongs to the mighty Birch, and I’d rather look than take. What is mine to take? The satisfaction after a long scramble uphill beneath the pines, that is all I need from the forest.

He has no intention of cutting down anything other than the dead Ashes. He goes on to tell me a story of the first dweller of my house who would stare out his window at the Birch each day. Maybe he and I were not all that different.

“You don’t have to shovel the driveway,” I said. “I’ll take care of it. The snow drift had blown over the drive causing the plow’s efforts to be unnoticeable since the big storm. I had intended to clean it up eventually, but shoveling a 200 ft. driveway by hand can feel daunting.

“How are those chickens fairing?” Jay asked.

“They seem happy,” I replied. “Laying a dozen eggs per day and so far no sign of predation.”

“Ah, well, good,” Jay said. “I’ve been watching the foxes check them out, but I’m glad to hear they’ve respected the fence boundaries.”

Jay was born and raised in the same house where he and his wife live now. He’s never flown anywhere, which for a man in his mid 40s is rare. He is of this place. His knowledge, stories, and skills show it. We feel blessed to have him as our neighbor. He reminds me of my Grandfather, who had a most generous heart.

Andrew with the ladies – photo by Therese Jornlin

Jay asks if I’d like an extra set of nest boxes for our new layer hens. It was his father’s, who passed away about 4 years prior, and the grief is still heavy on his heart. He was going to bring them to the scrap metal center, but would rather them be put to good use. I imagine him carrying out his father’s legacy on the land here. Tapping the sugar maples, clearing brush, hanging garlic to cure, tracking wildlife, and reading the trees for when they are ready to be felled.

“ I’ll drag it over. Good luck getting up the driveway, now,” he said as he heads for his yard.

I handed Jay a few eggs for his offering the nest boxes. There is nothing more satisfying than when generosity meets generosity.

One response to “Love your neighbor”