El Bolsón and the surrounding mountain ranges have been my home for the past month.  I knew when I first arrived late January that it would be a hard place to leave.  Río Azul is fed by glacier and snow melt from the cordillera. It glows turquoise green and blue like no color I have ever seen.  As the summer moved along, the water became shallower and warmer, but never quite warm enough to indulge in for more than five minutes. The refreshingly cold currents reminded me every day that I am alive. I inherited the name, `La Trucha,´ the trout. 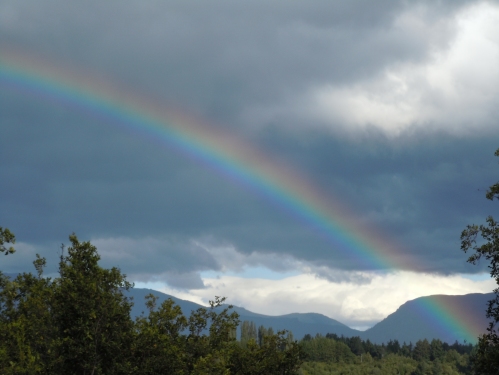 Some highlights from WWOOFing at La Confluencia were harvesting raspberries and cherries, bringing the cows and sheep home, manually storing hay during two of the hottest days of the summer, asado (BBQ) with the bridge building work crew,  watching the sun set from our porch, hiking to the glacier of Hielo Azul during a storm, watching the gauchos lasso cattle for vaccines, taking a hot tub under the stars and above the river, learning how to make pasta and bake sourdough bread, and of course sharing incredible homemade meals at the `upper lodge´ with my fellow WWOOFers.

After two and half weeks of volunteering in one of the most pristine places on Earth, I traveled down river a few miles for a week long workshop focusing on bioconstruction. As I was waiting for a bus to take me to the workshop, a beautiful Chilean woman picked me out of the crowd and grabbed my hand. `¿Bioconstruyendo?´ she asked me. `¡Sí, vamos!´ Let´s go I responded.  This quick, brief interaction with my new friend confirmed in my mind that everything would be alright for the next week. I once again felt held by the world even though I was traveling alone. 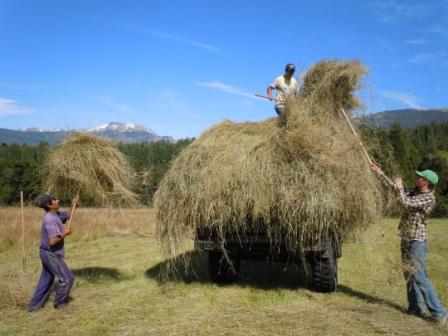 We arrived on foot after the bus dropped us off at Doña Rosa. The bus stop is named after a woman healer who once lived on the property where the Permaculture community is currently. Pastor Silvestre and others joined together to buy the land from her children after she died. The property is called Valle Pintado (Painted Valley).

Two men greeted us and gave us a tour of the site and where we could set up our tents. We were fortunate to arrive early because with 150 participants, the forest would soon become tent city and a flat shaded spot may be hard to find.

While eating a delicious vegetarian lunch, I was greeted by many new faces. A kiss on the cheek, a hug, and introductions- these three actions took up the majority of my time the first day. I lingered from group to group making new friends and listening to conversations in Spanish. There were English speakers around, but I admit I avoided them for a while so I could really immerse myself in Spanish. Even among my fellow Americans, we tried to converse in Spanish as much as possible.

The site was bustling with people pushing wheelbarrows, making straw and mud bricks, installing solar showers, setting up a huge geo dome, putting together a tipi, finishing walls with clay, and mixing large mounds of adobe. All week long would be like this- including workshops, lectures, music, yoga, massages, eating at picnic tables outside, mate breaks, and playing in the river. We were essentially learning how to build a community out of earthen materials and having a lot of fun in the process. 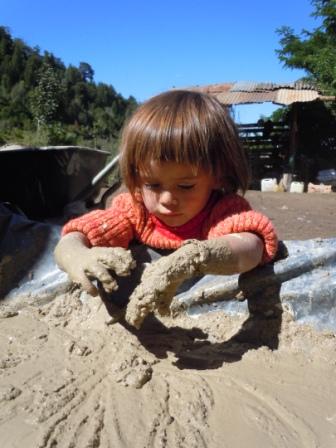 ¡Que línda!  is the expression I heard most throughout the day. It means `How beautiful!´ I have never seen or felt so much love and openness from such a large multigenerational, mixed heritage group of people. Even with the language barrier, I was welcomed into every circle and never felt any judgment or negativity. More and more each day I became more connected with nature, the river, the people, and the work. I began to forget about everything outside of Bioconstruyendo.

My routine consisted of waking up around 8 a.m. to the sound of flutes, sharing mate by the fogón (fire) since it was chilly until the sun came over the mountain, eating a breakfast of fruit and granola, morning circle, talleres (workshops), maté break, back to talleres, almuerzo (lunch), siesta (napping, swimming in the river, chilling out), talleres, maté break, talleres, la cena (dinner), music, and finally sleep. The days were long and very full.

On the night of the full moon the women gathered in the tipi. We shared stories and sang together. The last night we had a fiesta and danced to drums in front of the fire. We chanted and called to the rising moon. We worshiped the pachamama (Mother Earth) all week long. I felt strong and whole knowing that the group supported woman´s liberation to its fullest.

I had a hard time leaving when Monday finally arrived. People lingered and I had no set plans…maybe head north to Bariloche and then visit friends in Buenos Aires?  I decided not to let any of this stress me out and just to go with the flow. A large group was going to spend the afternoon upriver at a swimming hole called Paraíso. When someone asks if you want to go to paradise, how can you say no?

La trucha just could not leave her river. We hit the trail and next thing I know I am diving into the deep green waters, crawling up rocks, watching the rapids flow by with a giant smile on my face. This is where I am supposed to be right now, I thought. Right here with these beautiful people in this pure river. The water is so clean and cared for by the people that I stopped filtering it long ago. How rare and special it is to be able to drink straight from a river at this point in time. The people of El Bolsón have fought to keep the river free of industry.  Yes, this truly is paradise, heaven on Earth.

I plunge into the current so I can effortlessly be taken back to my friends and suddenly everyone is shouting. Pastor has harpooned an enormous trout! La Trucha! Not me, thank goodness. I crawl onto the rock where he has just ended the fishes´ life. I hear a splash and he has caught another one almost twice the size, 2 feet long! I sit next to him watching as he wrestles with it and bashes its head (careful not to destroy the precious cheek meat). It was all very exciting and emotional- taking the life of a very ancient fish so quickly. It was the grandfather of the river and now…ASADO! 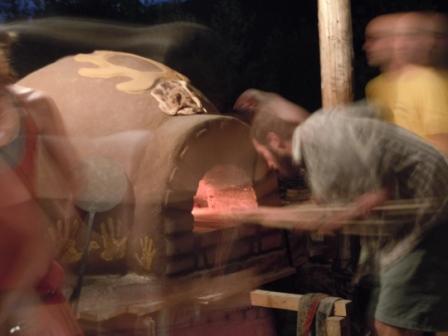 That night we put the newly built horno de barro (mud brick oven) to use by making pizza. We grilled beef and chorizo (sausage). And of course, la trucha, which was marinated, spiced, and garnished beautifully before heading for the horno de burro. Wine, fernet con coke, and homebrew beer that had been stashed in the river to keep cool flowed freely throughout the evening. I was happy I chose to stay and grateful for the invitation.