While sitting in their pasture the other day, I took the goats’ pictures as they ate grass, chewed on my camera bag, fought with each other, slept with their kids by their side, and chased after their Moms.

He is adorable, I know. Sometimes I think it is more of a blessing to be sitting next to this animal than if I were to have dinner with a hot celebrity.

All of the goats have freshened, or given birth. All 46 are milking. Pavo, the one in the front with the blue collar is a first-year who has recently freshened. She has such beautiful coloring! The photo doesn’t do her justice.

Andi is one of my favorites. She’s smiling at you! There was always one goat following me closely that day. They would take turns. I guess it was Andi’s turn to keep me in check.

Every goat has her own personality. Mimosa, AKA “Mimotional,” is always whining when I’m around. Gilly just stares at me as if she knows she is so much smarter than I am. Wyona is always picking a fight. Cyan doesn’t listen or respond when a broom taps her butt to cross the road because she’s too busy eating grass. 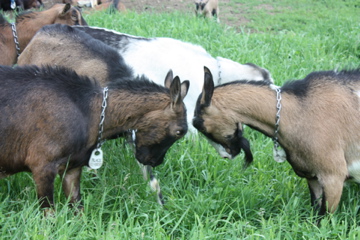 The girls love to fight. Blackberry (on the left) is one of the oldest goats in the herd. I like to think the old timers are keeping the newbies in check to show them who has more control. They fluff their back hair out and really hit each other hard. Makes for hard heads and entertainment. 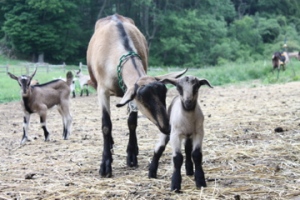 Laureley was one of the last to freshen a girl. A couple of times I watched her yell and run around looking for her kid if she was misplaced or sleeping elsewhere. The reunion was always very endearing as she found the little one finally.

What are you lookin’ at?

Sadly, all the kids moved to a new location down the road where they will be raised by a young woman who milks at the farm. They drink a lot of milk from their moms which we are now using to make cheese. Without the kids nursing, our milk production has increased.

They will be missed at the farm, but that’s just the way it goes running a business. Besides, at the rate they are growing, soon they would be as big as their moms. Like the 3 month old kids- they are huge and push me around when I try to clean their pens out. They grow up so fast! 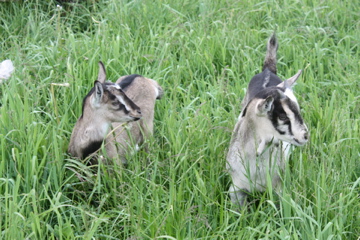