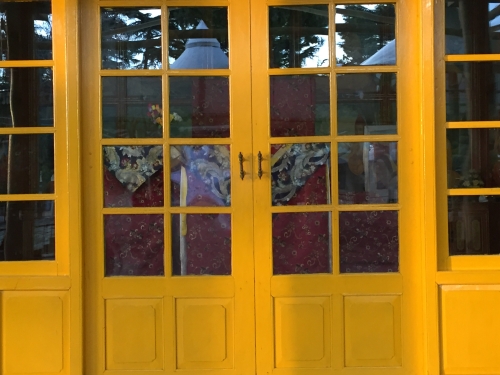 The golden doors of the Dalai Lama Temple, Dharamsala

On the new moon, my friends and I arrived in Dharamsala after a long journey in planes, trains and taxis. This is where the Dalai Lama and many monks live since being exiled from Tibet. The energy of the new moon set the mood for visioning and sharing intentions around the ghee journey.

“I think we need to knock on doors and ask people about ghee if we really want to learn the traditional way,” said Matsya. He was a salesman back in the States before traveling to India.

First, I scoffed at this idea. Knocking on people’s doors in a distant land while I was still adjusting to the time, culture, and lifestyle was asking a lot of myself. However, if this project of learning the culture of ghee was going to happen, it had to start somewhere.

So, we laced up our shoes and headed toward the nearest home with a few cows. We paused and greeted the beautiful cow and her calves. Matsya and Ani encouraged me to lead them toward the home. 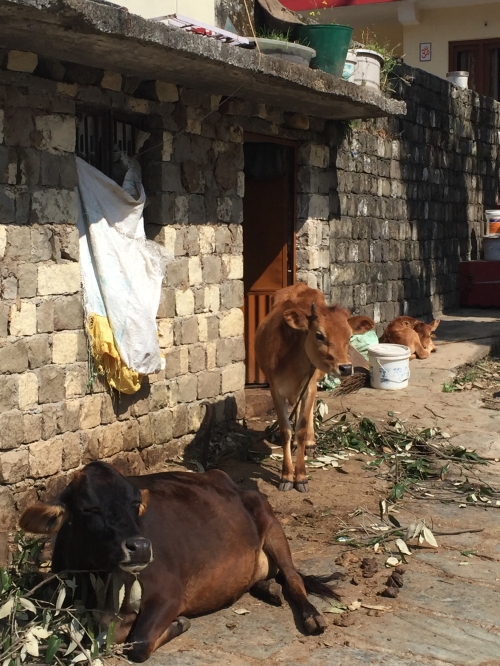 “Namaste,” I greeted a woman. “My name is Hannah and I am here with my friends to learn about ghee.”

The woman looked at me with kind eyes as she said, “No English.”

I thanked her and turned back toward my friends as we moved on to the next house. In that moment I wished we had a translator (or knew how to speak Hindi).

At the second home, we were advised to walk up the hill to the green house where the cows were. The woman’s confident head nodding and pointing assured us that we may find someone who makes ghee.

On the way uphill, we crossed paths with a group of young men who inquired about what we were doing. “We’re here to learn about ghee,” I said.

“Ghee?” they responded with a tone of confusion.

“Yes, ghee,” said Matsya. “We make it at home but would like to know how it is made here.”

Very enthusiastically, they invited us to meet their grandmother because she makes ghee. Our new friends were partying all week celebrating a family wedding, which we could hear across the village all evening. (Thank God for earplugs). After taking lots of group “selfies” together, their grandmother came downstairs to feed her two cows.

She did not speak English but her grandsons communicated our intentions of learning about ghee. Grandmother was not making ghee today. She only makes it on special days when she has accumulated enough curd to make the butter for ghee. 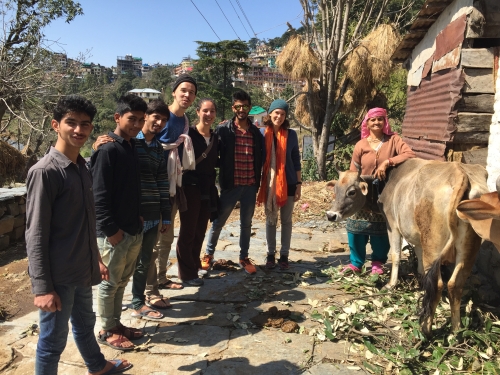 The group of young men very willingly explained the process: ghee is traditionally made from curd (cultured cream), similar to yogurt. The milk is collected each day and is added to the previous days batch of curd as the culture grows. The lactic acid in the cream ferments slightly giving it a tangy flavor. Once enough curd is gathered, it is churned by hand or with an electric machine that looks a little like an eggbeater.

Now we understand how the healthy rich fats from cow’s milk was preserved before refrigeration- fermentation!

We thanked the young men and their Grandmother as we continued on our journey.

Feeling like we had made some progress, we treated ourselves to a cup of chai at a nearby café. This is when it all began. The chai was flowing, the ghee Gods and Goddesses were watching over us, fresh mountain air of the Himalayas filled our lungs with creativity. We were ready to embark on a journey into the cultural wisdom of ghee.

We began searching the Internet for ghee producers in India because it felt important to visit both home scale and production scale facilities. Ani suddenly shouted, “You know what would be a great name for a ghee company? Holy Cow!”

We laughed, and sure enough, the company already existed in Delhi. I emailed the Holy Cow Foundation and heard back right away. They invited us to their Holy Cow Festival the following weekend and connected us with several nearby ghee producers. Yes! We finally had an “in” to the golden ghee river.
In those next couple of weeks we spoke with Ayurvedic doctors, attended cooking classes where we made ghee from cultured butter, visited several dairy farms ranging from 3 to
30,000 cows and ate delicious curries and Dahl graced with generous servings of ghee. 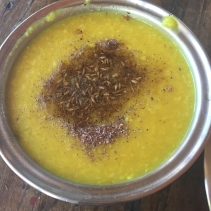 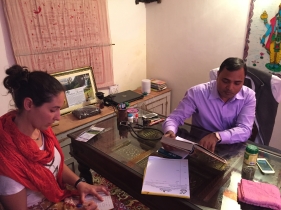 Learning the health benefits of ghee with an Ayurvedic doctor

At sunset, while Matysa and Ani were at a yoga class, I joined a ceremony along the Ganges River. There was beautiful music and singing around a small fire. This ritual of burning cow dung with ghee, known as Havan, symbolizes gratitude to the Gods and Goddesses, in particular, the life giving waters of the Ganges River. Lanterns full of ghee burn to purify the air- this is the transformation of the impure to the pure.

When the fire dies down, the ashes are placed on the third eye, throat chakra, and then tongue, to symbolize the purity that arises from the burning of the impure. After the sun sets, families participate in “puja” or prayer, as they light candles on small boats made of leaves and flowers to send down river. “Puja” is a way of showing our love to the Ganga (the holy river). 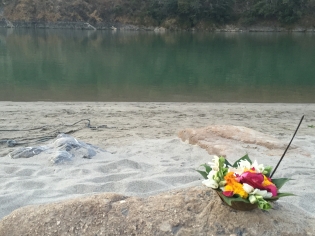 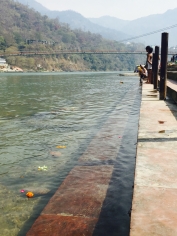 Ghee is sacred oil in India. It is the purest essence from the holy cow made by removing the milk solids while heating the butter. As we clarify the butter, we are removing what no longer serves us.

During satsang on the first day of spring, Sri Prem Baba of Brazil said, “Flowers are the enlightenment of the plant. The scent of the flower is the soul, the essence.”

He suggested today, that we “burn anything that does not allow us to align with our heart.”

What is left when we clarify our minds, hearts, and bodies?

Ghee, in essence, is love. The vibration of love is held throughout the entire process- from how the cow is raised to clarifying the butter in the home. Women bathe and wear clean clothing to prepare for making ghee. It is a sacred act honoring the life-bearing Mother Earth. 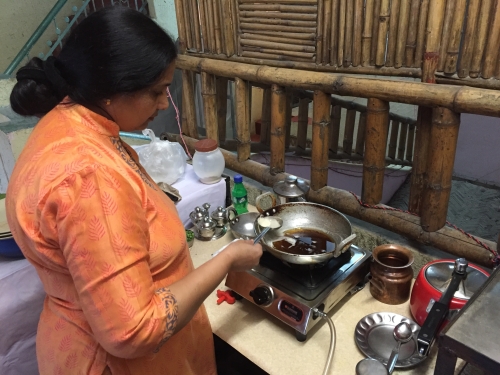 Ghee is offered to the Gods in the form of Halvah, a sweet pudding made with semolina flour, cardamom pods, almond meal, sugar, ghee and raisins. I had the honor of learning to make this tasty treat with Dr. Vibha Sharma in Rishikesh. She taught me that ghee is the medium for medicinal herbs. When ghee is cooked with herbs, it forms a union with the medicine. Ghee delivers the medicine to the organ systems that need balancing and repair. 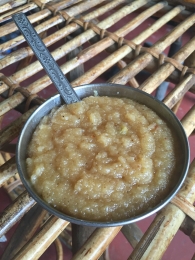 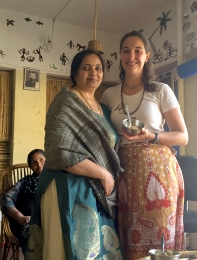 Dr. Vibha and I

I believe every plant, animal, insect, human, EVERYTHING is sacred.

Nourishing ourselves with the purest oil from the sacred cow is an act of honoring our divinity. The more I honor myself, the more I can offer and be of service to others 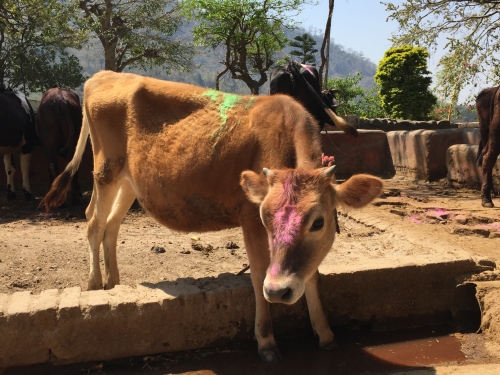 Holy cow on Holi Day, the festival of colors held on the spring equinox

Exactly three months later, as our most recent batch of ghee made on the Strawberry Solstice Full Moon sits in jars beside me, I commit to burning away anything that holds me back from sharing my love and passion with my village.

Here is a quote from my journal while in India, “Separation is only an idea. The truth is infinite love. A union of ghee, herbs, yoga, medicine, and love. If I find union inside myself, aligning to my soul, then I am one with all.”

Namaste. Blessings on your Summer Solstice.