I am at the end of a long chapter in this meat bird raising project. The chicks are almost four weeks old and only live between eight and ten weeks so they are reaching the middle of their lives. How relieved I am to be finally sitting in my hammock after removing all the chick brooders from my porch. It is once again my space for reading, napping, eating, and staring out into the yard. I am finding my inner peace and clarity now that the babes have “flown the nest.”

A peeping box with 25 living animals arrived at the post office early Wednesday morning of July 7th. I rushed home to quickly throw together the brooder that I had prepared, but all the different parts were scattered around my yard. In less than 15 minutes I had an old metal sap tank, heat lamp, wood shavings, newspaper, feeder, waterer, and thermometer. I dipped each of their beaks into the broiler booster water (vitamins, minerals, electrolytes) so they would know to drink after a long hard trip from Iowa.

Remember that brutal heat wave? It was 90-95 degrees during the day so the chicks were a little stressed out. They like it at that temperature, but I worried they would overheat with the heat lamp. I didn’t monitor the temp. religiously enough and it fluctuated too much the first week so I lost a few chicks. I also fed them cheap name brand grain because Blue Seal was on backorder for medicated chick starter. I ended up switching to Blue Seal Chick and Game Crumbles the following Tuesday, which agreed with them quite well.

Susan could see my frustration after losing a few chicks. I wondered what I was doing wrong and automatically blamed it all on myself. I’ve never raised chicks before, and doing it alone is very challenging. I asked some friends for advice along the way, but left the rest up to nature. One chick was obviously suffering greatly for over a day and was peeping every time is took a breadth. It drove me insane. No matter how hard I tried to ignore the anguish, it’s all I could hear day and night. Nurturing the little guy back to health was an option, so I attempted to bring it inside on a heating pad and give it water.

At 10 p.m. I was still giving him attention. There is a certain point where you just have to let go, not get emotionally attached, or use too much energy trying to save dying chicks. I could not take it anymore. He was suffering and so was I. The decision was made- it was time for him to move on and be at peace. This was the first and only animal I have ever put down without the intention of harvest.

I sobbed. Not for the baby chick, but more for me. It felt enormously pitiful. Here one minute, and gone the next. His little body looked peaceful. End the suffering. I was relieved. It was over and I could focus my attention back on the birds still alive. 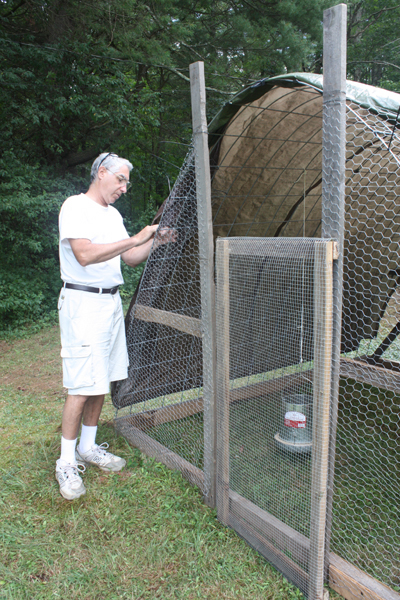 Cornish X Rocks grow incredibly fast. I was not prepared. By the second week I had to improvise quickly. I created another chick brooder and divided the group: 14 and 7. Phew. But not for long! They outgrew both brooders in another week. I couldn’t keep their bedding clean enough and they started knocking their waterers over causing wet bedding, not good for chicks that want to be warm and dry. It was time for them to move outside, onto grass. 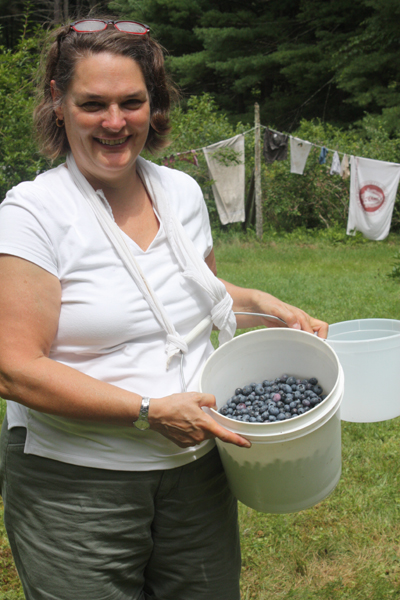 Mom Picks Blueberries for a Pie

My half finished chicken coop still sat on the front lawn around week two. Nothing motivates me more to finish a project than actually needing the structure to put chickens in A.S.A.P. The frame went up one day, the chicken wire the next, and then the tarp. This is called a two hoop cattle panel coop. Sounds kind of catchy.

On Saturday July 24 Susan and I introduced them to their new, permanent home on the lawn. Why the lawn? The extension cord for the heat lamps can reach until they are old enough to be without extra heat. Twice a day I move the coop onto fresh grass, mostly to manage their manure. Now they are almost across the lawn and will be entering a pasture where the bucks live. We sectioned off a large part of the pasture with electric fencing so they will be more protected from predators. Hopefully they will wander beyond the coop and I won’t have to move it every day, but they appear to be so lazy and content inside. 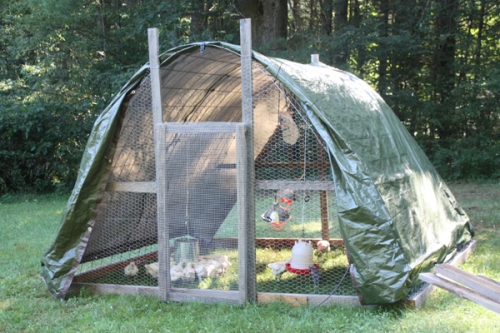 I am conflicted with this meat bird breed- Cornish X Rocks. Its qualities are selected specifically to grow fast white meat. This is the breed the large chicken farms use, which is almost all of the chicken in the grocery store. If you have seen the CAFO (Confined Animal Feeding Operation) photos, those chickens are the same breed I am raising. They eat constantly, lie around, and often can barely walk by the end of the eight weeks. They really need medicated feed because of how prone to coccidiosis they are due to not enough space, boredom, stress, and unhealthy habits. Even I had to treat them because they outgrew my equipment so fast. I don’t believe this is “natural” chicken behavior. This is the industry’s response is to America’s high demand for cheap tender chicken.

Despite these downfalls, I have never eaten such a delicious chicken as the Cornish X Rocks. The rewards from the final product are tremendous, but do they outweigh the not so lovely realities before reaching the dinner plate? I’m not sure yet. Maybe in a few weeks I will have a better idea. Until then, my 20 birds are no longer chicks! They have white feathers growing in and weigh at least two pounds. At least they are roaming around on fresh grass every day. What I appreciate most is how much they are teaching me about raising poultry and being responsible for my own livestock. 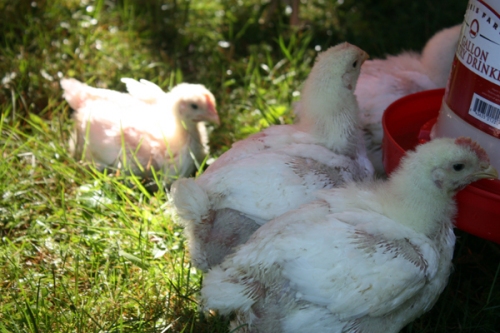 4 responses to “Raising Birds for Meat”